From the 1st of December 2014 to the 12th of December 2014, 17 students from SMSV, accompanied by Dr Lucienne Tan Yu Sing, embarked on the inaugural SMSV mission trip to Kunming, China. Preparation for the trip started 5 months before, and it involved countless, dedicated hours of meetings, preparations and fund raisings. Our members were able to raise close to $6000 for this trip through their efforts, which made it possible to expand our operations capability to give more 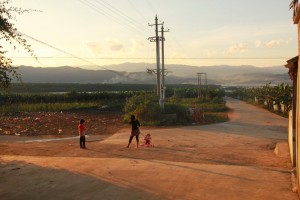 to the people of Kunming.

After countless hours of preparation, we were finally ready to fly off on our Thai airways flight to Kunming, albeit a 1 night stop over at Bangkok to acquire more logistics and a little bit of ‘Rest and Relax’.

Landing in China, we were welcomed by the Kunming weather, cold winds that got funneled through the mountains in the direction of the airport. The pace of China’s development struck us as we saw countless factories and chimneys on our way to the Kunming police headquarters to get our ‘work permits’. After the administrative issues, SIM card purchasing, oily dinner and a cold nights sleep, we were finally on our way to the Hong Village in the city of XiShuangBaNa, which took us 8 hours (flight time from Singapore to Melbourne).

Arriving at the Hong village, we were warmly greeted by our host, Ah Bo, who allowed us to sleep in his village home for the duration of our stay. His family and his playful daughter ZiYi, which Jia Hao unofficially adopted during the trip, also warmly welcomed us. 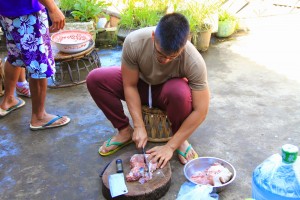 Our main objectives during this leg of our trip included

2) Construct a toilet in order to improve sanitation around the village.

Throughout the 4 days spent in the Hong village, we were able to provide basic medical support through the temporary clinic we 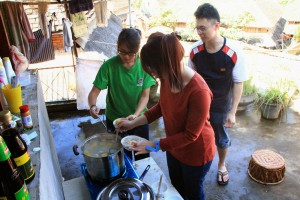 set up in Ah Bo’s house. We faced certain challenges during the process. Firstly, language was a barrier as some elderly patients were only able to speak in the local dialect.

Ah Bo’s father was able to translate for us at times, but most of the time, our team resorted to body language in order to convey the message. Secondly, the turnout for the clinic was less than what we expected. We postulated this to be due to the lack medication dispensing. Villagers would only come to the clinic if there were medication being given out. Unfortunately as our team was not licensed to dispense medication in China, we were disappointed with the number that turned up.

Despite the setback, we were able to capitalize on this situation. We focused most of our manpower into the construction of the toilet on the last few days of our stay. Due to the lack of machinery, we had to use rudimentary methods to construct the toilet. 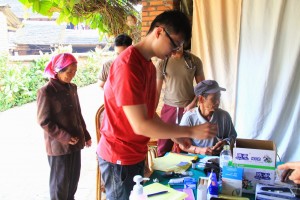 Water was diverted from the nearby stream and channeled into the bucket using the laws of physics (not kidding). We had to carry each rock (weighing on average 15 kg each) by hand and throw it into the ditch in order to build the foundation. By the end of the day, each of us would be covered in sweat, dust, cement and occasionally blood. However, our efforts paid off, as we were able to construct the foundation in just 3 days.

It was our stay in the village, living under one roof, on basic necessities, playing cards at night, waking up in the middle of the night by grunting pigs, cooking for each other, that built the camaraderie and bonded the team together. Even with the lack of modern day luxuries, were thoroughly enjoyed each other company and the company of the villagers as well. But alas, we had to leave Hong village back to Kunming city for the 2nd part of our trip.

Back in the city, our coordinator, Diana, arranged for us a packed 3 day schedule, going around various primary schools to conduct basic medical checkups for the children. We planned our operation meticulously, with different people, with varying skill sets, taking on different roles.

With the help of the ‘prefects’ in the school, we were able to organize the kids into proper rows to run the operation smoothly. There weren’t too many hickups along the way, except for a few 4 year olds getting lost. It was extremely heartening to see us put a smile on the faces of these kids. When there was time to spare after the health checkups, we gave a helping hand to the classes at Diana’s tuition center.  Despite the fact that half the team were non-proficient in speaking mandarin, the children were happy that there was an older ‘sibling’ there to accompany them.

As part of the mission trip, we were also introduced to the low economic areas of Kunming city. We went to the houses of some of the kids to give basic medical support to these families. This experience opened our eyes, and we saw the poor conditions that many of these families live in. We hope that providing basic medical care to these families would make a difference to their standard of living.

After 11 days of non-stop work and travel, it was time to bid goodbye to China. Through these 11 days, we were blessed to experience all aspects of China, from the simple villages to the modern city of Kunming, from wet markets to mega hypermarkets. This trip has given us an insight into the developing world around us, and the various ways that we can contribute back. With continued support from the members of SMSV, we hope that there would be more opportunities for future generations of SMSV members to contribute their time and effort to a good cause.